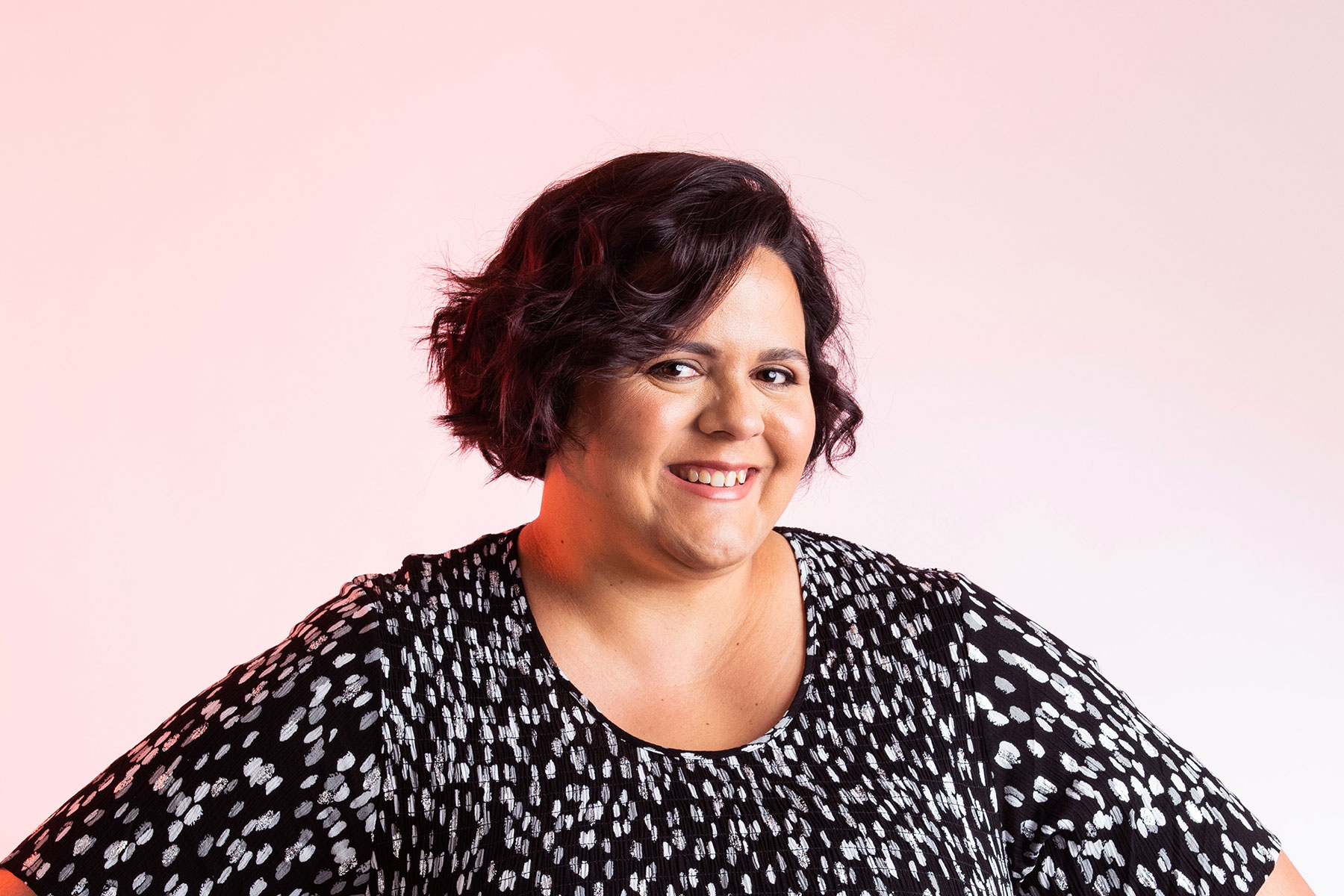 Posted at 09:00h in Behind The Scenes, Interviews by BlackMilk Clothing
0 Likes

In celebration of NAIDOC Week – which in 2021 is themed ‘Heal Country!’ – we teamed up with Indigenous Australian artist Melanie Hava to create Jigay–Bana (Earth–Water), a mini collection featuring Melanie’s stunning interpretations of Australia’s natural beauty.

10% of the first week’s sales from the Jigay–Bana collection will be donated to Melanie’s chosen charity the Reef Restoration Foundation, which aims to regenerate damaged parts of the Great Barrier Reef through ocean-based coral nurseries.

Melanie was born in Mount Isa, Queensland, Australia to a father from the oldest city Austria, Enns (Upper Austria) and a mother who is from one of the oldest cultures in the world, Aboriginal people of Australia. She identifies through her mother’s line as a Mamu Aboriginal woman, from the Dryribal speaking Dugul-barra and Warii-barra family groups of the Johnstone River catchment in the Wet Tropics of Far North Queensland. Mamu people are one of about 70 Aboriginal groups on the east Australian coast and one of 20 Rainforest Aboriginal groups whose freshwater country immediately adjoins the Reef sea country. Both Rainforest and Reef country are important sources of inspiration for her work.

Growing up in Tully (QLD, Aus), Melanie used to go down to Mission Beach every Saturday for fish and chips and discovered a love for the mysteries of the reef through books and of course, when Finding Nemo came out, she was instantly inspired and fell in love with the beautiful graphics of the reef. The first time she realised that she could paint the reef was when she moved to Cairns and took her first trip out to Green Island and got to see firsthand the beautiful reef and fishes from the glass bottom boat. On the surface the Great Barrier Reef sea country looks like beautiful plain water, but underneath the “bunggu“ (waves), a flurry of activity and sea life abounds. The rest was left to her imagination and her paintbrush.

She has now settled down in Far North Queensland’s Cairns – close at hand to her mother’s country where she feels close to the spirit of rainforest and reef. Her life now revolves around her three children and running the house whilst keeping up with her gallery and commissioned artworks.

We asked Melanie a few questions to find out more about her artwork, her inspirations, and her connection to country. 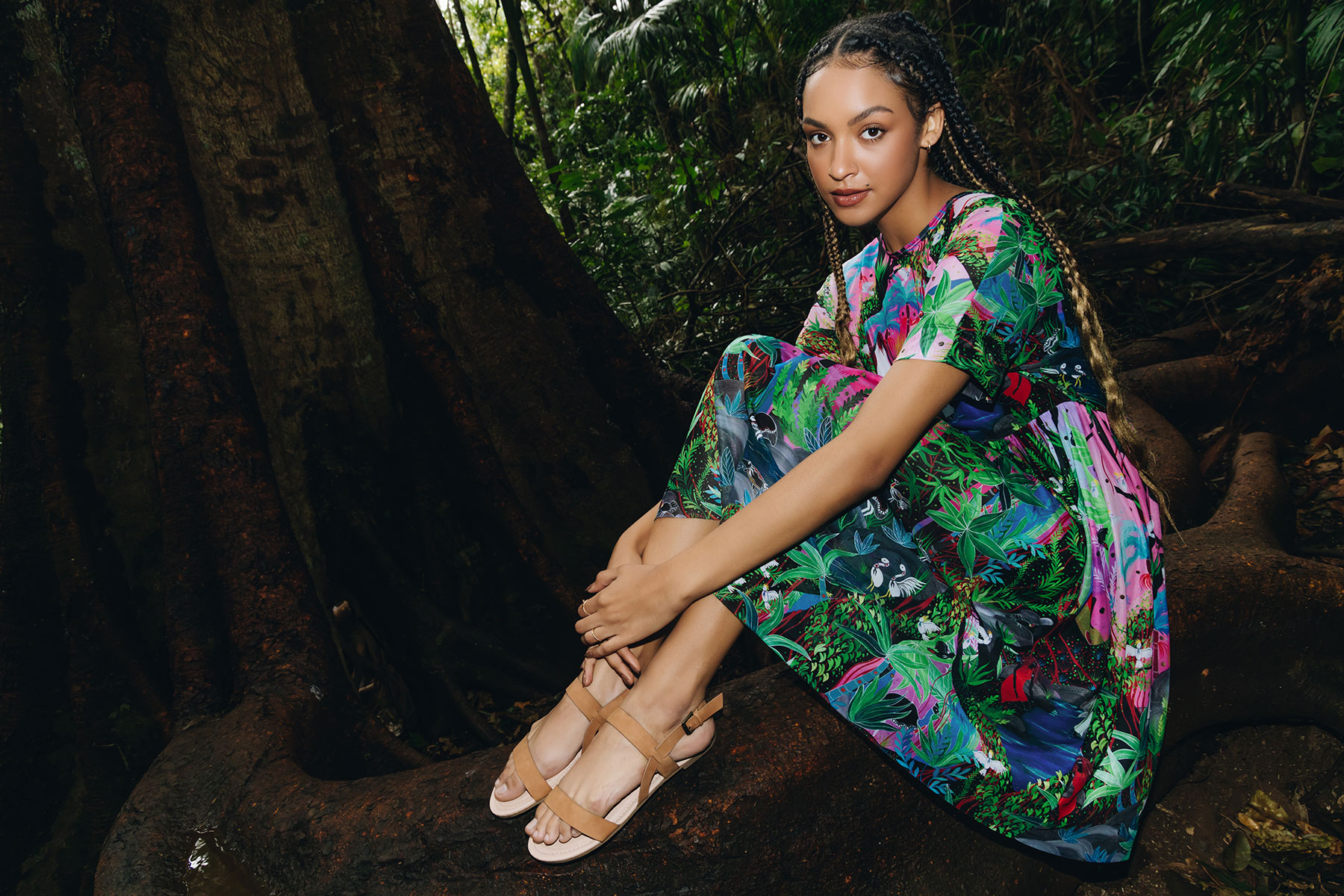 How long have you been creating art?

I have been creating and selling my art since I was a teenager! I knew from a very young age that I was going to be an artist. While also being a bookworm and a piano player, art was a world that I frequently retreated into as I grew up. I reckon this is because I was deaf and felt I couldn’t join in with groups of people. As a teen and along with my sister Joelene, we created art on didgeridoos and canvas. This art sold very quickly in the little, opal mining outback town of Yowah way out back of western Queensland. This red soil country still influences my works.

When I was in my late teens/early twenties, I started playing around with the ideas of combining my Aboriginal and Austrian inspirations. I had already tried my style in Aboriginal, Folk and Abstract arts and I had had a successful first exhibition at Outback at Isa Gallery (and right now coming up to a 10 year anniversary exhibition with them). So at 23 I travelled to Austria to live with my father’s family and absorb as much as I could of the Folk and European culture. More than anything I loved the architecture, inside and out. The patterns, gold leaf and occasional Swarovski crystal in my works are some things that I’ve gleaned from the European side to my heritage.

What are you inspired by?

I am inspired by Australia’s unique flora and fauna and its colours.

How do you create your artworks? What is your creative process?

I use acrylic paint on canvas – most of the time after I put down a beautiful background, and an animal or theme I want to paint, I just follow my heart and it all comes together as I go along. 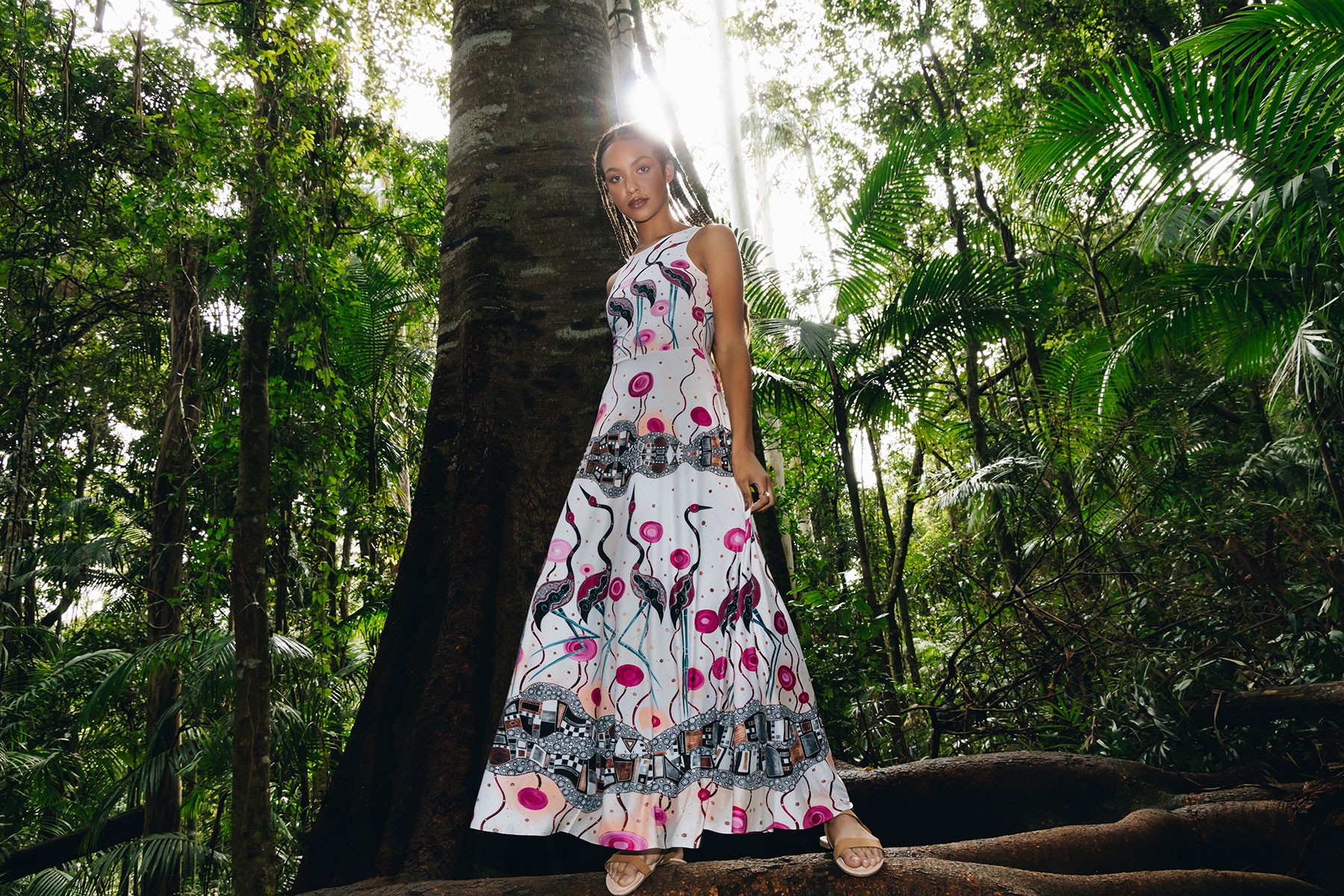 Do any of the artworks that we are featuring have any special meaning or stories connected with them that you would like to share?

Most of my artworks are drawn from my experiences with nature. I’ve lived all over Queensland, from the outback to the coast, and these experiences and animal sightings have inspired much of my work. I also spent a year living in Austria when I was young and have returned a few times when I was older. That’s when I introduced gold leaf and Swarovski crystals into my work, though I don’t use the latter as much as I used to!

When I moved up to Cairns 10 years ago, I started to explore using rainforest and reef in my works and painting many of the visions I had of my grandmother’s stories, but giving them a whimsical and romantic feel.

Do you have a personal favourite artwork in the collection?

Yes! The brolgas (The Dance)! I really played around with abstract ideas here to create a playful, whimsical painting of these beautiful cranes and I used patterns of gold and silver leaf that were inspired by Gustav Klimt’s artworks. I have even kept the original painting for myself! 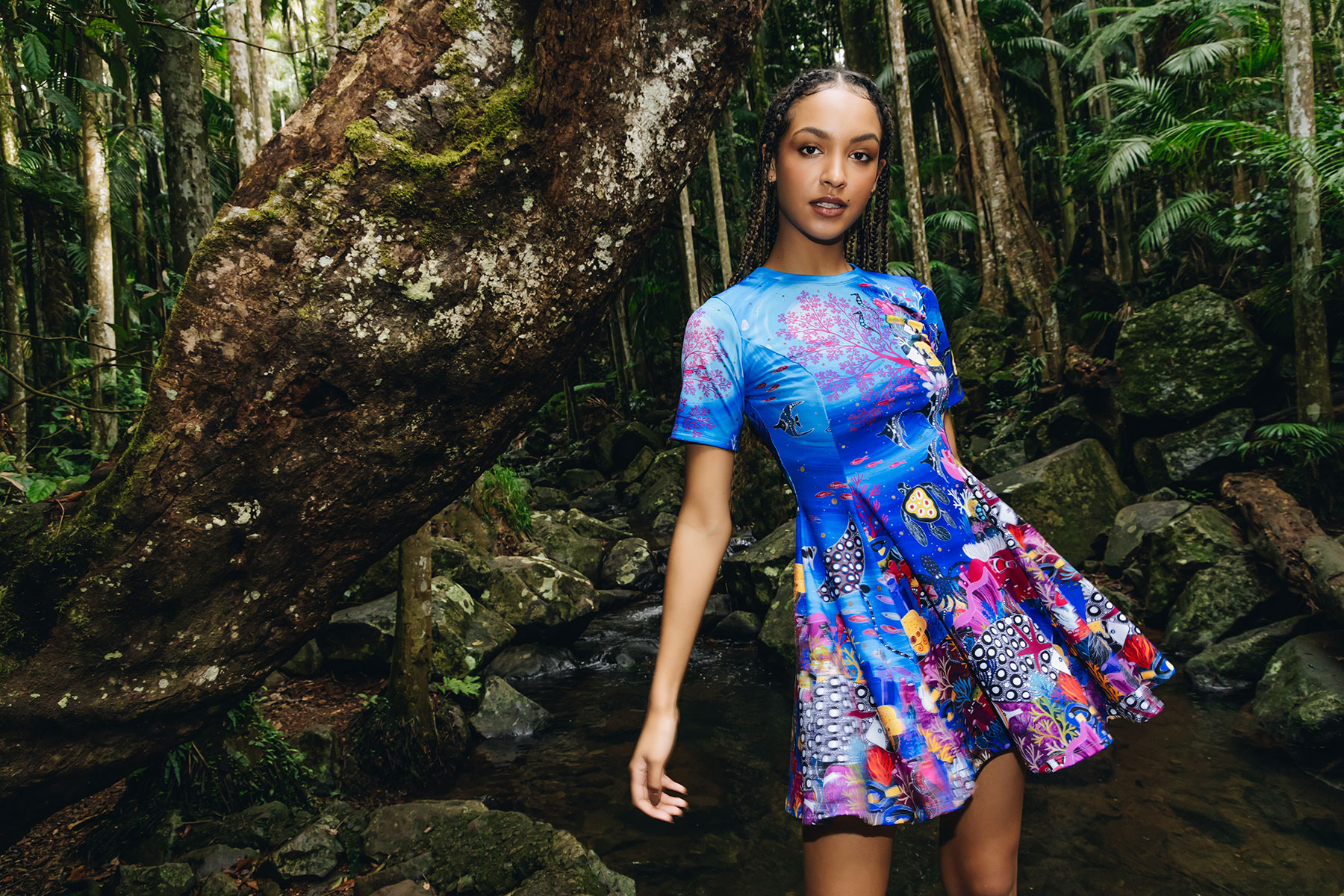 What is the significance of NAIDOC week?

NAIDOC Week celebrations are held across Australia each July to celebrate the history, culture and achievements of Aboriginal and Torres Strait Islander peoples. NAIDOC is celebrated not only in Indigenous communities, but by Australians from all walks of life.

The 2021 theme of NAIDOC week is ‘Heal Country’ and this is calling for us to continue to seek greater protections for our lands, our waters, our sacred sites and our cultural heritage from exploitation, desecration and destruction. This year’s theme also seeks substantive institutional, structural, and collaborative reform – something generations of our Elders and communities have been advocating, marching and fighting for.

What does your chosen charity mean to you?

I think that the Reef Restoration Foundation sits in perfectly with this years NAIDOC theme – Heal Country! – which calls for all Australians to continue to seek greater protection from exploitation and destruction of land, water, sacred sites and cultural heritage.

They work with the reef to heal any damage done to its beautiful corals and provide it with the best chance of survival. Addressing the impacts of climate change, water quality and other pressures on the Reef are critically important and we need to do much more to build its resilience. I love our Great Barrier Reef and I want it to be there for my descendants for generations to come! 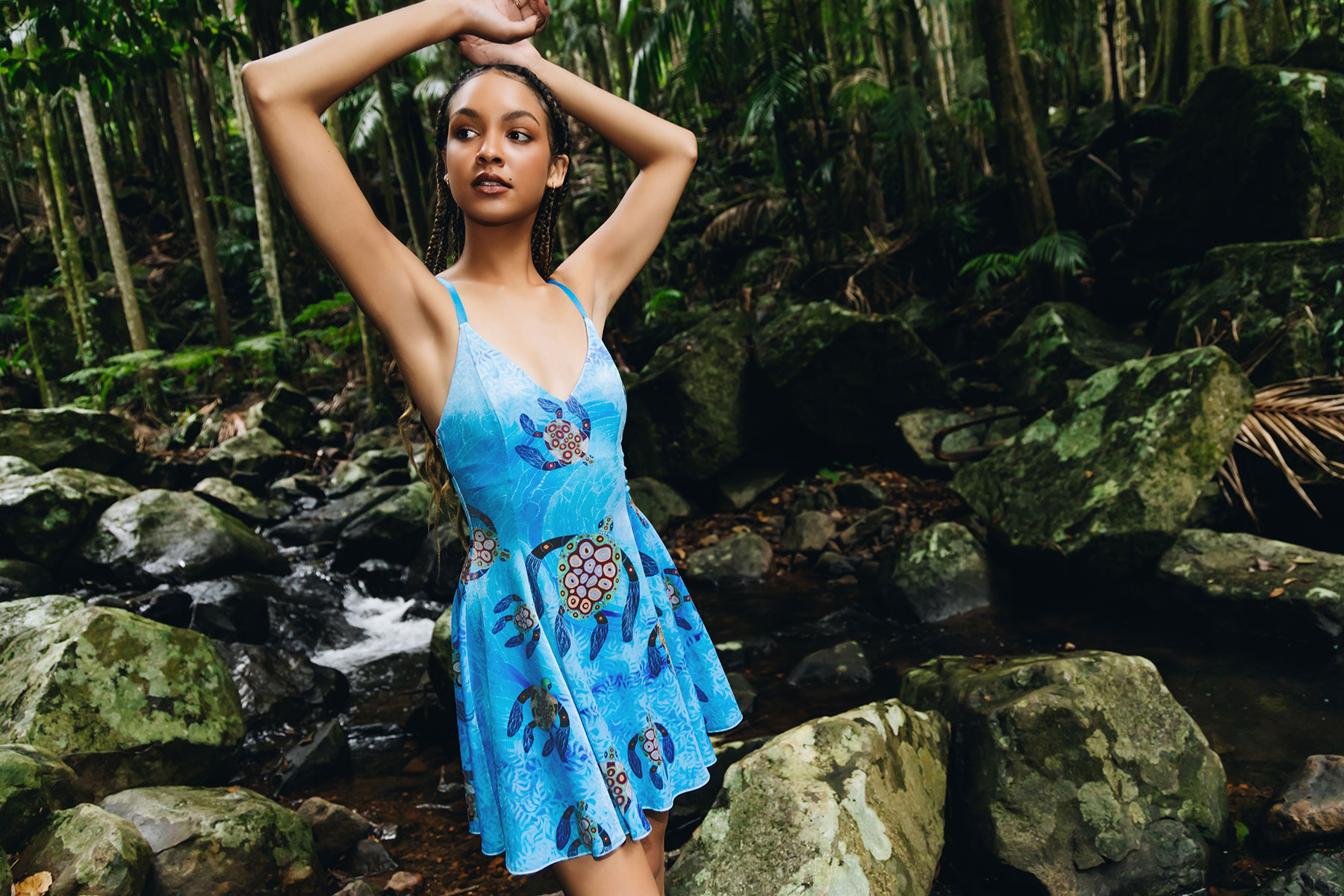 What is the special significance of the Great Barrier Reef to Indigenous Australians?

While the more recent generations of our family associate more with Millaa Millaa and the Palmerston Highway along the North Johnstone River catchment, the family stories that have been passed along show that my great great Grandad Duginyoh Paddy Brooks travelled much around Mamu country, down to the coast and sea. We have stories too of other rainforest people travelling down the rivers to the reefs. Our freshwaters flow out to the sea waters “wajali” and come back to the land as rains and what we do on land upstream affects the reef and all its creatures.

Mamu people are also part of TUMRA (Traditional Use of Marine Resources Agreement) and work together to manage our sea country and increase the numbers of turtles and dugongs for a sustainable future. 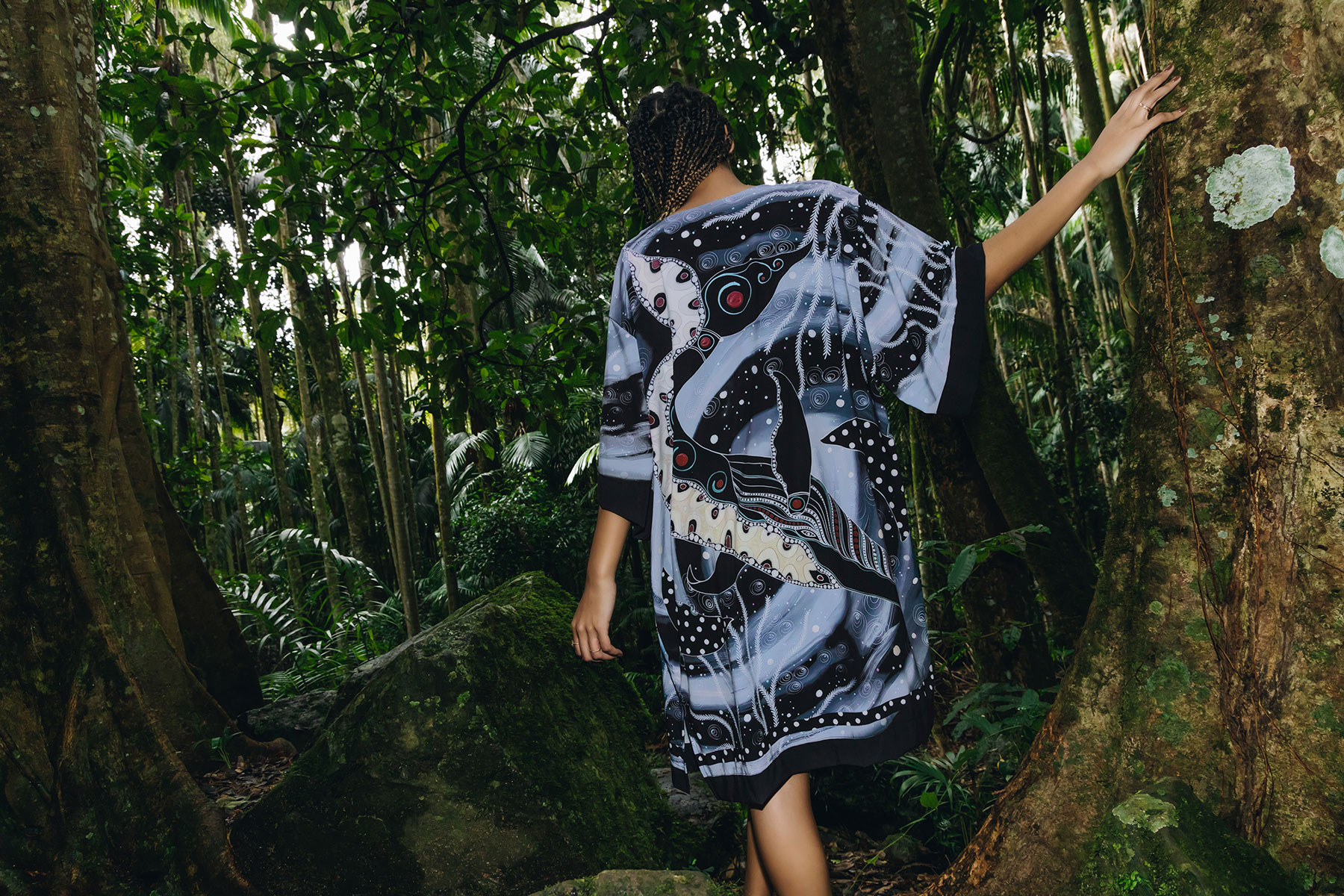 What advice would you give to young Indigenous artists?

Get to know as much as you can about your culture and heritage and embrace it. Keep on being creative and exploring styles until you find one that is unique to you!

Where in Australia should everyone visit at least once?

Cairns! We are smack bang in the middle of the Great Barrier Reef and the beautiful tropical rainforests.

I love the art of the pre-Raphaelite period – my favourite artist of that time is John William Waterhouse. There’s something beautiful, poetic and tragic about his paintings. I grew up reading and writing poetry with my head always in the clouds. Now that I’m older and have had relationships and children of my own I’m no longer as much of a romantic – except in my art!

This campaign features first nations model Sené (IG: senemaluwapi) and was shot on the Curtis Falls track, Joalah section, Tamborine National Park. This is part of the Bundjalung Nation – we recognise and pay our respects to the original owners of this land.

You can see a Map of Indigenous Australia here.