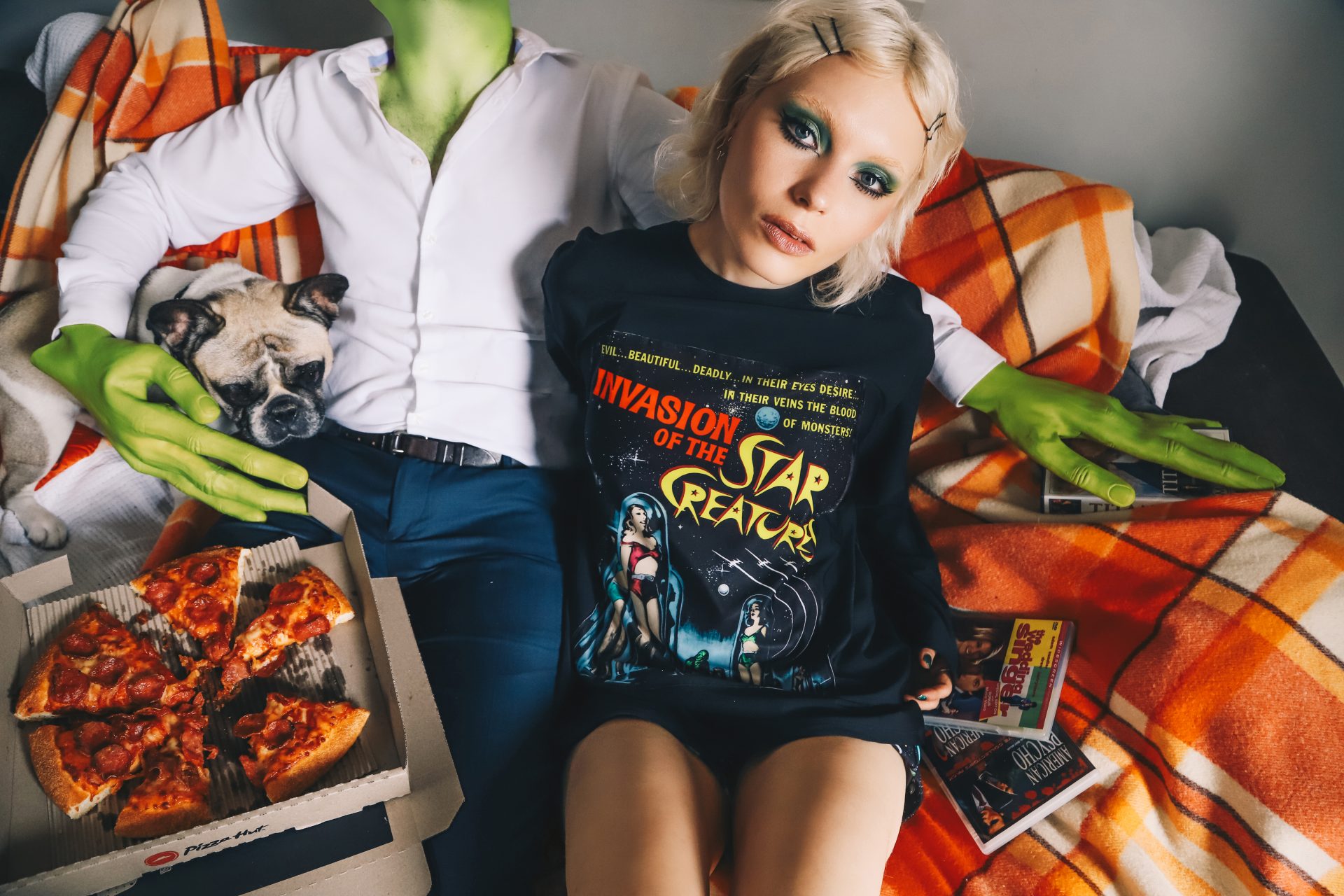 18 Feb The Art that Inspired My Boyfriend’s an Alien

Posted at 07:00h in Behind The Scenes by BlackMilk Clothing
0 Likes

The Art that Inspired My Boyfriend’s an Alien

So as you might know, putting incredible art on clothes is kind of our thing. Sometimes that art is created from scratch by our super-talented graphics team, while other times it takes cues from existing art, and occasionally, weird old movies.

There’s some pretty cool stories behind some of the art and films referenced in My Boyfriend’s an Alien, so we wanted to take you Behind The Scenes and share where they came from.

This stunning art piece was created by Croatian artist Marina Mika as a tribute to a lost love one. She wanted to send them her eternal love and positive thoughts by immortalising their memory in her art. Now we think that is possibly the most beautiful and heartwarming story behind an artwork that we’ve ever heard.

Marina takes a lot of inspiration from her feelings and inner state. She says when it comes to finding ideas for her work: “it has to resonate with my inner state, otherwise there is no point in ‘looking’ for something to be inspired by.” Her styles are extremely diverse, taking cues from everything from manga, art nouveau, renaissance, rococo and even spiritual illustrations, like Hindu deities.

Marina was born and raised in Croatia, but now lives in Berlin. You can find more of her art on Facebook or Instagram.

The work of Minnesota-based artist, Devin Francisco, is not for the faint-hearted. But it is for you if you love all things horror. He’s drawn almost every iconic movie villain (as well as a few heroes – and victims). Think Jack Torrance, Pennywise, Freddy Kreuger – even Gremlins and Chucky make an appearance in his portfolio.

Devin has a particular fascination with horror movies from the ‘70s and ‘80s, as he loves the gritty and grainy film look. You’ll notice this really comes through in the technique of all his art.

The Astronaut originally started when Devin was sketching a skull, and it slowly evolved into what you see here. That’s some pretty insane talent right there.

You can find more of Devin’s work on Instagram.

Invasion of the Star Creatures

Have you ever seen a movie that was so bad it was good? We all have one, and Invasion of the Star Creatures is a classic example. This 1960’s sci-fi comedy was so notoriously B-grade and intentionally-cringeworthy that it became a cult-classic.

Our favourite thing about this film though? It has this epic movie poster. We had no choice but to immortalise it in a Patch Sweater.

It might look hilarious to us now, but this film was groundbreaking for its time, and is considered one of the most influential films, especially for the sci-fi genre. It even inspired the Smashing Pumpkins’ music video for Tonight, Tonight.

Is there an artist or film you’d like to see more of in a future release? Leave us a comment here – we’d love to hear your ideas.

My Boyfriend's an Alien